Android’s 13 features allow you to personalise your devices on your own. It includes a number of new phone and tablet capabilities, including the ability to extend app colour theming to even more apps. Language options may be configured per app, and there is even the possibility to transfer media from one Android device and paste it to another with a simple click. Android 13 includes these and other enhancements, such as HDR video compatibility in third-party camera apps, an upgraded media output switcher, and braille displays for Talkback.

It also goes beyond the phone to provide you with a consistent set of experiences across all of your devices, including tablets and laptop computers. Let’s take a closer look at everything Android 13 has to offer.

Here are Some Android 13 Features and How To Use Them.

Personalization is the user’s option among the Android 13 features.You may customise your smartphone’s home and lock screens by changing the wallpaper and the Android app theme, colour, and language for each app. Let’s have a look at how you may improve the personalization of your phone.

2.The Theme Icons Have Been Updated

A revised media player with full-screen music or podcast art and a dancing playback bar is available. When you play music, the album art and playback bar move with you. It’s also functional in Chrome.

It is one of the best Android features for those who are fluent in more than one language and wish to use the app in a language other than the system language. Use your apps in as many languages as you choose, depending on your preferences.

With developments in Android features, security is also progressing.

Google has introduced a new Photo Picker system that lets users safeguard local and cloud-based media items such as images and movies. There is no need to transfer whole media files when using any software. You can now specify which images or videos you want to share with which app. You have more power. For further professional assistance, contact an Android app development business.

The clipboard also received a privacy upgrade. When you copy and paste personal information, such as a phone number, Android will notify you and delete the clipboard history. All of this happens after a while to prevent illegal access.

Keep command of all app alerts. The apps you request will send you information. Notification permission is required for new apps downloaded from the Play Store.

Google has increased its performance with the following Android 13 features:

Do You Need To Employ an Experienced Android App Developer?

10.Messages in The Stream

You can send messages even if your phone is not updated to Android 13. That means you’ll be able to send and receive messages right from your Chromebook’s messaging app while working on your laptop. And you don’t want your phone to disrupt your work. For additional technical assistance, hire an Android app developer.

Spatial audio creates an immersive listening experience by allowing you to enjoy the music dependent on your head movement, utilising head-tracking equipped headphones. Bluetooth Low Energy (LE) audio is supported in Android 13, which increases sound quality and allows you to broadcast audio to several devices at the same time.

12.A Tablet with Several Functions

With the Android 13 features update, Google overhauled the tablet taskbar, allowing users to access all apps at the same time. You can use drag and drop to operate on a split-screen view from the taskbar. To limit the number of unintended stray marks when writing or drawing on the tablet, register your stylus pen as independent touches.

While Android 13 is now stable, the Android 13 beta was officially compatible with all Treble-enabled devices. It makes it easier for developers who do not own a Pixel device to prepare for the upcoming release, despite the fact that some critical functionality is missing. For example, audio, for certain builds, does not work. For more technical advice, contact a mobile app development business.

Android has traditionally outperformed iOS in terms of notification management and display. Nonetheless, there is one part of Apple’s ecosystem that we admire. Applications must explicitly request your permission before sending notifications. Android 13 features finally catch up, and apps will not be able to send you information when you install them unless you grant them permission. It’s important to note that upgrading from Android 12 only impacts newly installed apps and does not affect existing functionality.

As a result, the Android 13 update lacks the feature set of Android 12. It instead provides a more constant, stable, and updated everyday experience. For more information, contact Solitaire Infosys , a reputable mobile app development company in Tricity that specialises in mobile app development, migration, and customization. They let business owners construct mobile apps by selecting pre-built features to sell to clients. 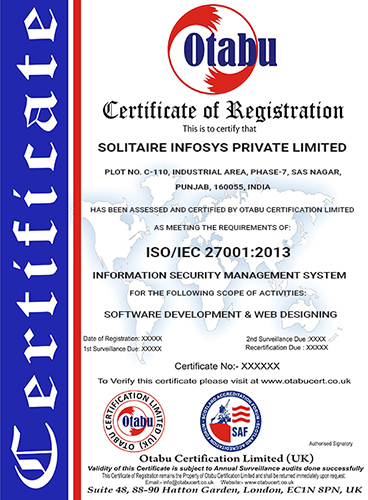